Winding Through The Milky Way 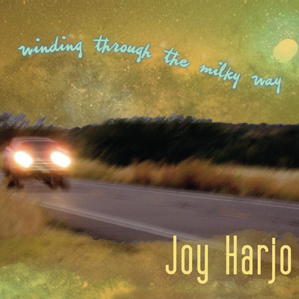 An album of new songs coming from the heart of the Earth.

The opening song reaching into our primordial center and pulling forward into the conscious, the memories of our ancestors to wake us to our destiny.

Winding Through the Milky Way marks the culmination of an ongoing dream. Harjo found her songs first through poetry, and published seven award winning books of poetry, including How We Became Human, New and Selected Poems. She picked up a saxophone in the late 80’s and put together the band Joy Harjo and Poetic Justice. With the band she released her first CD Letter from the End of the Twentieth Century , now a classic. Two solo CD’s followed: Native Joy for Real, and She Had Some Horses. Among Harjo’s honors are the Eagle Spirit Achievement Award for overall contributions in the arts, the New Mexico Governor’s Award for Excellence in the Arts and the Lifetime Achievement Award from the Native Writers Circle of the Americas. She performs internationally solo and with her new band. She premiered a reading of her one-woman show (with original music), Wings of Night Sky, Wings of Morning Light at the Public Theater in NYC in 2007. She co-wrote the signature film of the National Museum of the American Indian, A Thousand Roads. Harjo writes a column “Comings and Goings” for her tribal newspaper, the Muscogee Nation News. She lives mostly in Honolulu, Hawai’i where she is a member of the Hui Nalu Canoe Club, and in Albuquerque, New Mexico. Produced by Larry Mitchell.

CATCHING THE LIGHT on Audible